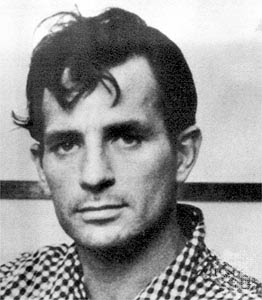 Many, many years ago at Harvard Square in Boston, Massachusetts, I sat at an outdoor café' drinking coffee with Jack Kerouac. Over our cups, Jack offered to me his succinct and discerning perspective into where he found the visionary words written in his poetry and books. And, on what being a writer of your own experiences truly means to your craft.

The words he wrote elevated and enlightened a generation (and the poetry form, itself) -- as only Jack Kerouac could.

During a brief moment of silence between us, I idly watched the hurried and harried crowd of tourists and Cambridge denizens meandering around us under a setting, summer’s sun.

A thought occurred to me. I averted my attention from the crowd back to our table-for-two and asked, "Jack where did you come up with all that incredible material for On the Road , and the poems you've written over the years?"

Jack sat flatly in his chair while I spoke, staring blankly down into his cup . A sudden melancholy caught me by surprise, as I thought how he appeared so much older than his actual age of forty-five. Seeing him in this weakened physical state, it felt to me as if he had been prematurely aged by the world, which he had chronicled for his generation.

I think Jack sensed my sadness. He averted his sunken and wearied eyes (which still held a dark, piercing stare) from the cup of coffee cradled in his world-worn hands and faced me. Leaning his thin and sagging shoulders forward, he began to speak, and his voice sounded as callused as his hands. But, there was an intense conviction in those words he next spoke to me that projected a vitality and strength, which belied his frail appearance.

Jack said, "Jeff, there's no need to worry about, or even to ask where the hell mine, or for that matter your writing comes from. We can sit here until we’re both bones talking s*it over that subject; it's irrelevant to the real point."

"Here's the thing; all the words, imagery, or whatever you'll ever need are here all around you now." He illustrated his point by gesturing towards the street, and at the people walking by with those leathery hands.

He continued. "Everything you have, or will ever experience, is where your writing will come from. Take what you need from that. And, stop worrying about where anyone else got their words. Think only about what you want to write and then just f**king do it, man!"

A wry smile arose on his face as that intense stare relaxed. He reached over and gently patted my much younger shoulder with one of those callused hands. And, in a commiserative tone he said. "Jeff, you worry too much about how you're going write, be concerned with only what you're already writing. Always ask yourself this question when you sit down to write: am I writing about what I've experienced, or am I just acting like an old, tired mockingbird? Which kind of writer are you gonna be, kiddo?”

Grinning widely now Jack said, “People will come along, read your stuff and then make up their own minds whether they care about it, or not. Just, make sure that you tell 'em what this old world showed you, the way you saw it and you’ll be just fine."

Jack cheerfully raised his nearly empty cup in a celebratory toast, as he sardonically concluded, "And to hell with them all my young friend if they don’t dig your groove!"

And, ever since that day of coffee and conversation with Kerouac, long away from now, I've tried to be the writer he so generously instructed me to be.

I believe that hearing Jack Kerouac's unwavering conviction in what your own truth and words are, has not only helped me to find my own true writer's voice, but made me a better man for it in the process.

My heartfelt gratitude goes out to you, Jack, on whatever celestial road you're now traveling!
Posted by RJ Jeffreys at 3:48 AM 20 comments: